Equipped with a range of high definition cameras, Archéotech SA can rapidly measure important sites or monuments using different tapes of drones. Using specific shooting methods, the documentation of urban sites reproduces as well the elevations as the plans. 3D models of photographic quality can also be generated this way, just like what was realized for the Saint-Moritz Abbey in Valais, where Archéotech SA carried out complete measurements using aerial photogrammetry, which has then been used to recreate a precise 3D model of the abbey in its whole; this led to the creation of an equivalent model moulded in bronze to present the visitors with.

The octocoptere AscTec Falcon 8 is equipped with a camera continuously stabilized by an inertial platform. We can rotate it on all 3 spatial axes. Panoramic shootings are possible on the horizontal and vertical planes. Missions can be repeated to document a site from the same programmed angles. Able to fly as low as a dozen centimetres and as high as a several dozen metres, the drone is an ideal tool to document in details archaeological sites, excavations, monuments and works of art. The Swinglet and eBee drones from Sensefly are mainly designed for photogrammetric coverage of large scale sites. They cover up to 10 square kilometres in one mission of 45 minutes flight.

With DJI’s Mavic PRO drone, measuring and photographing sites with difficult internal access becomes easy and fast. Allying stability and protected propellers, the Mavic PRO flies inside enclosed spaces. It allows for a complete coverage of a construction’s elements that are inaccessible to classical terrestrial photogrammetry. To improve the drone’s abilities and precision, Archéotech SA programmed the adequate software for vertical or diagonal flight plans, thus allowing the drone to always stay positioned at a steady distance from the facades.

The images produced with our drones are treated with new photogrammetry software on our powerful parallel super-computers.

With the convergent terrestrial photogrammetry, it is easy and extremely fast to measure facades, archaeological excavations or technical infrastructures.

The precision of digital convergent photogrammetry is excellent in all 3 dimensions. This technology is particularly useful in zones that have no space; the absence of strict constraint for shooting makes it really reliable on subjects with strong reliefs. Historical photographs can be integrated to a model to reconstitute missing elements.

These digital techniques model in three dimensions the subjects’ geometry. On the contrary, pixels of photograms can be projected onto the 3D model to obtain perfectly oriented textures. Each scene can be visualized from any axis of projection in order to obtain an image of photographic quality at the wanted scale.

Orthophotography rapidly produces metric based media of photographic quality allowing the archaeologists and restorers to record their observations on the site without having to care about measuring anything.

For an archaeologist, these techniques document day after day the different states of an excavation. They offer the possibility to produce computer-generated photographs that illustrate situations never before seen simultaneously on the field.

The AscTec Falcon 8 can take various cameras with; it is one of the only drones that can examine structures from underneath (arch of a bridge)
Various drones and cameras: eBee, AsTec Falcon 8 avec la FLIR Tau 2 and the multispectral Tetracam
Aerial views of Lausanne Cathedral and Fribourg’s Town Hall taken by a drone 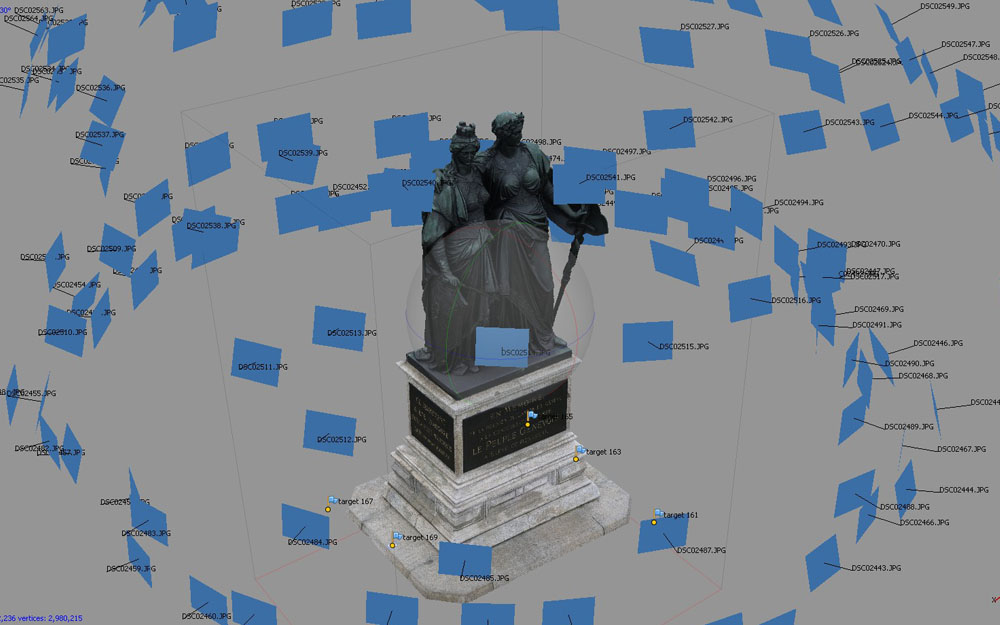